It’s not a good idea to throw your toddler in front of a video game console without doing the research. There are some great games out there for kids, but they’re not all appropriate for young children. If you’re ready for your little one to pick up a controller, you’ll want to find the best Wii games for toddlers.

I also give you the best Wii game for four-year-olds although they are already considered preschoolers. The reason is that the preferences overlap between these age groups. Very much depends on an individual child.

Every parent has different reasons to let their little ones play video games.

Here are the most common reasons to give your little one some screen time.

1. Accept the Modern Life of Kids

Kids’ entertainment is changing rapidly. While you might still expect your toddler to be playing with stuffed animals, the truth is that most children of this age like to emulate older kids.

What are older kids playing with? Video games, of course.

You may be able to fight the media for a couple of years, but sooner or later he or she will start playing anyway.

“For two- to five-year-olds, an hour a day of high-quality programming is fine”

Many young dads are gamers. Instead of ruining their lives with games (to the surprise of their parents), they have found them to be very rewarding. So you may want to introduce your toddler to a great hobby.

3. Spend Time With Your Little one

Young parents have little time, and for many dads, gaming is an integral part of their lives. So some dads choose to play interesting child-friendly games that toddlers can watch.

TIP: Animal Crossing: New Leaf (check the latest price on Amazon) is one of the best games that you can play with the Wii and is fun for your toddler to watch.

4. Have an Hour for Yourself

Let’s be honest here, a toddler (or is it just my boy) is more destructive than the Hulk.

So having him do something else than throwing cooking vessels around, is a blessing.

Consequently, there are more and more games targeted towards this age range, hoping to capture a market that’s starting to grow.

If you’re a parent, then, it’s the right time to find good games for your toddler.

This isn’t to say that you need to invest in the most expensive or most high-tech system for your little one. Instead, you need a system that’s going to work for your child’s stage of development.

There are several options and the Nintendo Wii, and Wii U are great for little ones.

Why the Wii and the Wii U?

At this point, you might be wondering why the Wii is singled out as an excellent console for small children.

After all, it’s not exactly new – the console itself is already two generations behind Nintendo’s current output Switch.

That doesn’t, however, mean that it isn’t great for kids. In fact, the Wii’s age is part of what makes it so toddler-friendly:

The Wii was the first mainstream console to use motion controls for all its games. That means that a toddler only has to worry about moving around a controller, not memorizing button layouts.

The combination of being inexpensive and easy to use makes it a great first console for a toddler.

Wii U was a successor to the Wii, but you can play the same games with both of them.

How to Know if Your Toddler is Ready?

As you might imagine, not every three-year-old child is ready for video games. Fortunately, there are a few ways to tell if your child is prepared.

First, try to figure out if your child is interested in games. If he or she is trying to play along with you or with older kids, it may be time to hand over the controller.

You also want to look at hand-eye coordination. Your child doesn’t need to be a sports prodigy to play, but being able to hold the controller and point at objects is a must. At least for the best Wii games for toddlers.

If your child tires out very quickly or has trouble lifting things, you might want to wait on the game front.

It’s also a good idea to look at basic deductive capabilities. If your child is still having difficulty with the concept of “if this, then that,” games are going to be frustrating.

If your child can handle playing on a playground, though, video games won’t be too tough.

What Makes a Game Toddler-Friendly?

Once you decide to buy a Wii, you’ll need to buy games. The best Wii games for 3 year olds or older toddlers should require very little reading. It’s okay if there are voices or if there’s audio, but text-heavy RPGs are probably out.

Likewise, you want to avoid finding anything that’s got very complex controls that would need a great deal of coordination.

These games also need to be friendly. Cartoonish violence might be okay, but blood and gore are out. You want something that will delight a child, not something that’s going to give him or her nightmares.

Finally, you want something that’s going to engage your child on his or her level.

The LEGO series of games from Traveler’s Tales has been around for quite some time. If there’s a kid-friendly movie franchise out there, you can bet that a LEGO game is not too far behind.

This particular game is one of the best on the Wii, especially for younger players. The game itself takes the Harry Potter story and strips it of the things that might be a bit much for the average toddler. That’s right – less death, fewer scary monsters, and no discussions about abusive aunts and uncles!

Instead, you get a hilarious little story with which your toddler can interact.

This game is probably better for ages four to five, though, as it does have some platforming sections and some of the controls do require precision.

If your child loves Harry Potter or LEGO, this might be the best game with which to start him or her off. It’s not perfect, but it will allow your child to have a great time.

Rayman Origins is one of the best games on the Wii no matter what your age. A clever little platformer, it’s easy to pick up for a few minutes and play. It’s also the kind of game that you’ll lose hours to if you aren’t careful.

In short, it’s perfect for younger kids. The bad news, though, is that this game might not be right for the very little ones. It’s more a mature four-year-old game because the platforming can get difficult in the higher levels.

Even with that said, the game does a good job of moving kids into ‘real’ video games. It’s just a hop skip from this one to platformers like New Super Mario Brothers, so don’t overlook the character. If Rayman Origins seems like it’s easy for your child, definitely consider jumping up to a harder tier of difficulty. If it’s too tough, you might be looking at video games a little too early for your child.

Mario Kart is absolutely one of the first games that any Nintendo Wii owner should buy. It’s a fantastic party game, as well as one that’s fun to play when you’re killing time on your own.

It’s also incredibly simple, so even a toddler can have fun with it! Mario Kart Wii is probably the easiest iteration of the game to grasp, with motion controls that make it easy for even a little one to understand. While some of the courses can be a bit tough, it’s still an excellent game for any child who is still learning how to play. Yes, the blue shell is still in this one.

Have fun losing races to your toddler who manages to get all the best items on the last lap.

TIP: If you’ve also got a balance board, then the Wii Fit Plus may be a better option. It contains a lot of easy and fun balance games ideal for young kids.

Wii Sports was included with the Wii, and it remains one of the most popular games on the system.

Less a full game than a collection of mini-games, this one is the best showcase for motion controls that Nintendo ever made. It’s an absolute joy to play and something that your toddler is going to love.

If your toddler can swing a remote, he or she can play this game. Outside of menus, he or she won’t even have to press a button. Games like boxing and baseball are the easiest, I’ve found that kids have a weird tendency to love bowling more than anything else.

You’re absolutely not going to go wrong with this game collection.

The playground is what you get when you take the concepts behind Wii Sports and add a schoolyard twist. A favorite among the pre-school crowd, this game adds favorites like tetherball and dodgeball to the mix while still sticking with basic motion controls.

As a parent, it’s hard to see this game as anything other than an expanded version of Wii Sports. Slightly older toddlers adore the game, though, mostly because of the setting. It makes them feel like they are playing on the playground at school and it’s hard to argue with that kind of immersion.

To Sum It Up

So, what’s the best bet?

If you’re looking for a younger toddler, stick with Wii Sports (check the latest price on Amazon). This is one of the best Wii games for 3 year olds and younger due to both its simplicity and its easily grasped concepts. This said, Wii Fit Plus (click for price on Amazon) has excellent fun balance games but you also need the board.

If you’re looking for the best Wii games for 4 year olds and older, go with Mario Kart (check the latest price on Amazon). Just remember that not all versions come with a wheel so you may have to buy it separately.

And don’t forget that as these are old games, the prices fluctuate quite a lot. Scroll on Amazon to check what different sellers offer, and if the asking prices seem too much, try your luck on eBay:) 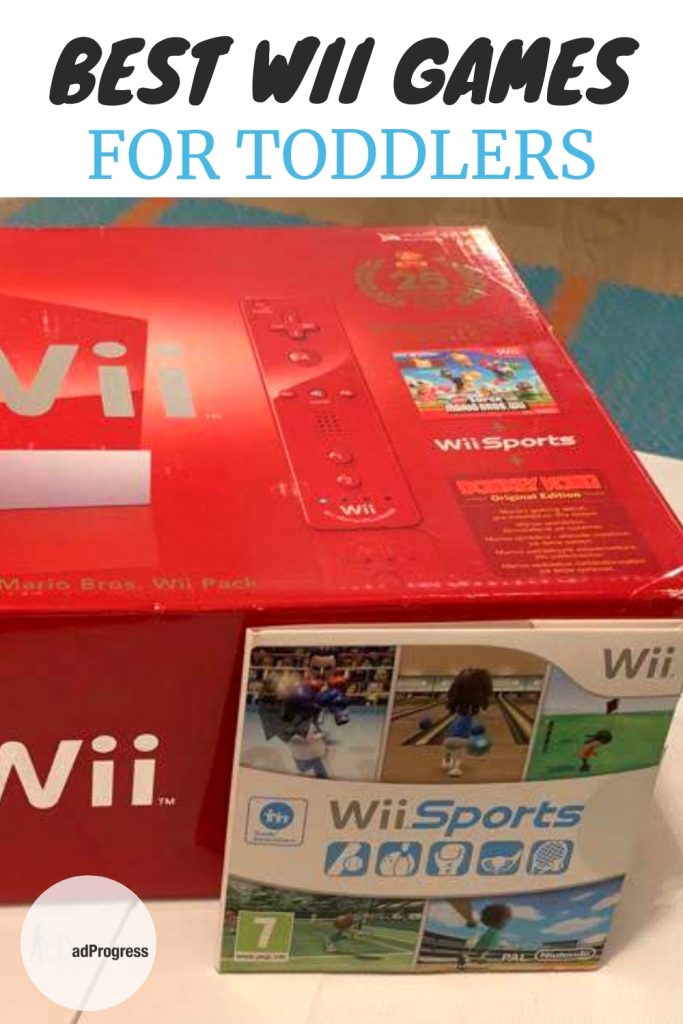